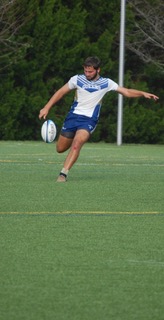 Stanton attended Quest K-8 and it was such a blessing to be able to participate in a challenging sports schedule. He played on WCBA and New Life Camp Basketball teams, as well as North Wake Baseball. But the highlight of his time at Quest was their accommodation for his being a part of a team that made it to Disney World: The North Raleigh Bulldogs, 2011 Pop Warner National Champions.

His 2012 team also made it to Disney and the academic support provided by the Quest staff was crucial to being able to come home to the holidays stress free and caught up.  The elementary age sports preparation allowed Stanton to earn the positions of fullback and fly half for North Carolina's 3-time State Rugby Champions: The Raleigh Rattlesnakes, as well as fullback for the 4-time NC Youth Rugby Union All-state team! Stanton also received his senior letter at Leesville High School for line backer and special teams.

Stanton received a rugby and academic scholarship to Queens University of Charlotte where in 2017 he was selected for the Southeastern Rugby's All Conference Team as a freshman. In 2018, he was named Top 200 College Rugby Players in the US.. and made the Deans List!